Commemorative Address was given by Captain Russell Burrell 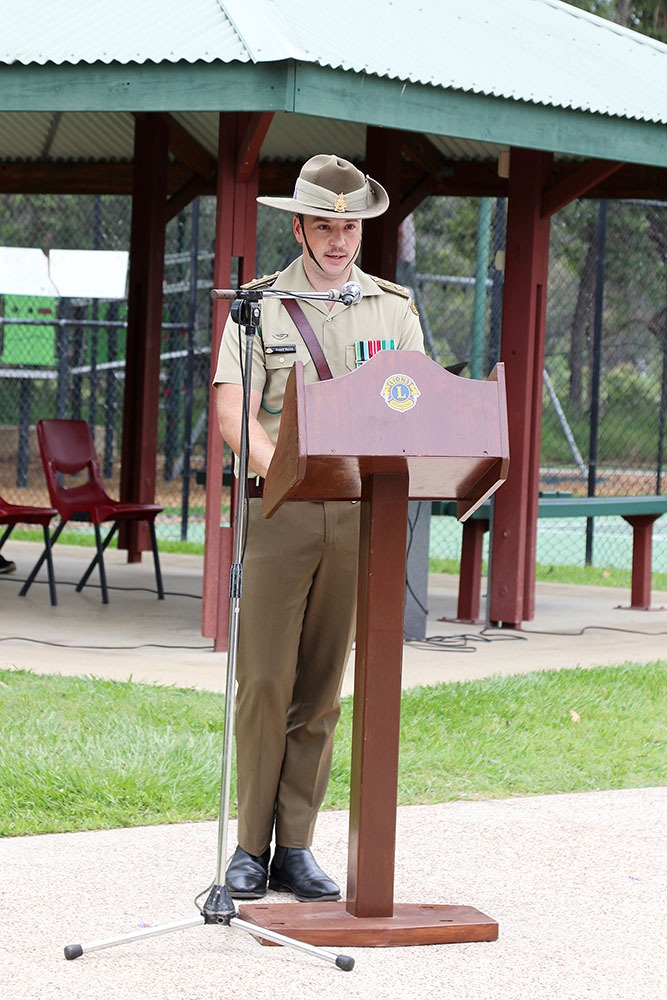 On Thursday 11th of November 2021, the community of Tamborine commemorated Remembrance Day. The ceremony was organised by the Tamborine Cenotaph Committee in conjunction with the Tamborine & District Citizens Association Inc and the Tamborine Village Lions Club. The theme for Remembrance Day was ‘Connecting Our Past To Our Future” with an underlying focus on families as a secondary theme.

Denise Brown introduced the ceremony, then guests were welcomed with an address by Councillor Jeff McConnell who also gave a Reflection drawing upon present feelings within our community, considering why it is important for families and communities to stay connected, with inspiration for how our community can learn from the past.

The Hymn ‘Lead On Kindly Light’ was sung by the congregation, followed by a Commemorative Address given by Captain Russell Burrell, member of both our local community of Tamborine and the local Defence Force community. Captain Russell is currently serving in the Australian Army, based at Canungra, as a very proud member of the Australian Defence Force.

Captain Russell, through the address, publicly recognised the hardships and sacrifices members of the defence forces go through in service to the nation. He also recognised those burdens borne by their families as a result.
Russell said, “As a husband, father, and son I know that the burdens and hardships of service are not just carried by those of us in uniform, but are matched equally by those that love us, and who provide us with the opportunities to serve this great nation through their equally great sacrifices, albeit ones that are often not as well recognised.”

He told of the reason for commemoration for Remembrance Day, “When the guns fell silent on the 11th hour of the 11th day of the 11th month in 1918, 103 years ago, and all fighting ceased in the most cataclysmic and destructive war the world, to that point, had ever known, over 400,000 Australians had answered the call of the British Empire and enlisted in the
Australian Imperial Force. They served in theatres of war from Gallipoli and the Middle East, from the islands to our north in what was then termed German New Guinea, to Mesopotamia and the Arabian Peninsula, and in the blood-soaked fields of France and Belgium. From a population of just under 5 million, Australia had sent over 400,000 of her sons and daughters to war, over 20% of the nation’s population. More than 60,000 of them paid the ultimate sacrifice. On this day 103 years ago, when the armistice was signed, the triumphant joy of victory was heavily tempered by the bitter taste of loss, and every year since we have paused for a minute’s silence to pay homage to that sacrifice.”

A poem ‘Mates’ was read by TDCA Inc President Syd Norman who served in the Merchant Navy as a Foreign Going Chief Engineer. The flags were lowered by members of the Tamborine Mountain Scouts, and the Prayer (A Psalm of David) was led by Cr Jeff McConnell. Capt Russell Burrell cited The Ode, and the Last Post was played under direction of Valentine Jones from
Satin Sounds. One Minute Silence was observed at 11am by the gathering, who were then stirred by the sounds of ‘Rouse’. Wreaths were laid at the base of the Cenotaph, and National Anthems of the United Kingdom and Australia were played in honour of WWI servicepersons. The closing hymn ‘Amazing Grace’ was sung by the gathered community, who then went
to enjoy refreshments in the hall provided for by the Tamborine Village Lions. Thank you to all those who attended, and to the organisers.

A Note From The Editor

We hope everyone is having a great start to Summer!
I must say it was a relief to have the mask restrictions lifted, so glad to not have to continually ‘suck in’ your own breath – SPOKE TOO SOON! But I am genuinely concerned for the upcoming mandate by the Queensland government and what it will mean for businesses, their staff, and ultimately livelihoods in terms of financial stability. Choice is something we as a democratic society enjoy as a right, so it will most likely be quite difficult, and possibly frightening, for those who are unwilling or unable to comply with the mandate’s requirements. An interesting point of note regarding the Queensland-NSW border closures is that when they were closed in March 2020, it was the first time they had been closed since the Spanish Flu in 1919 – over 100 years ago! But I digress – over the past month I have attended two gatherings of citizens coming together to protest the mandate.
At one of them, I was talking to former Mayor of Beaudesert, Joy Drescher, only to discover some hours later that evening she had unfortunately passed away. It came as a great shock, and a big lesson to not take for granted you can always return to a conversation to talk or engage further with someone because you just don’t know what is going to happen and when things in life are going to change. Vale Joy, you will be greatly missed! Thank you for your wonderful and colourful interactions!
Hoping to take a bit of a break for the New Year and a bit of a restructure of the papers, so stay tuned for a ‘bit of excitement’ going forward!
Stay safe and inspired, and hope everyone has a lovely end of year celebration with family and friends. Wishing you all a very Merry Christmas and a happy New Year! Bring on 2022!
Best Wishes Kerri