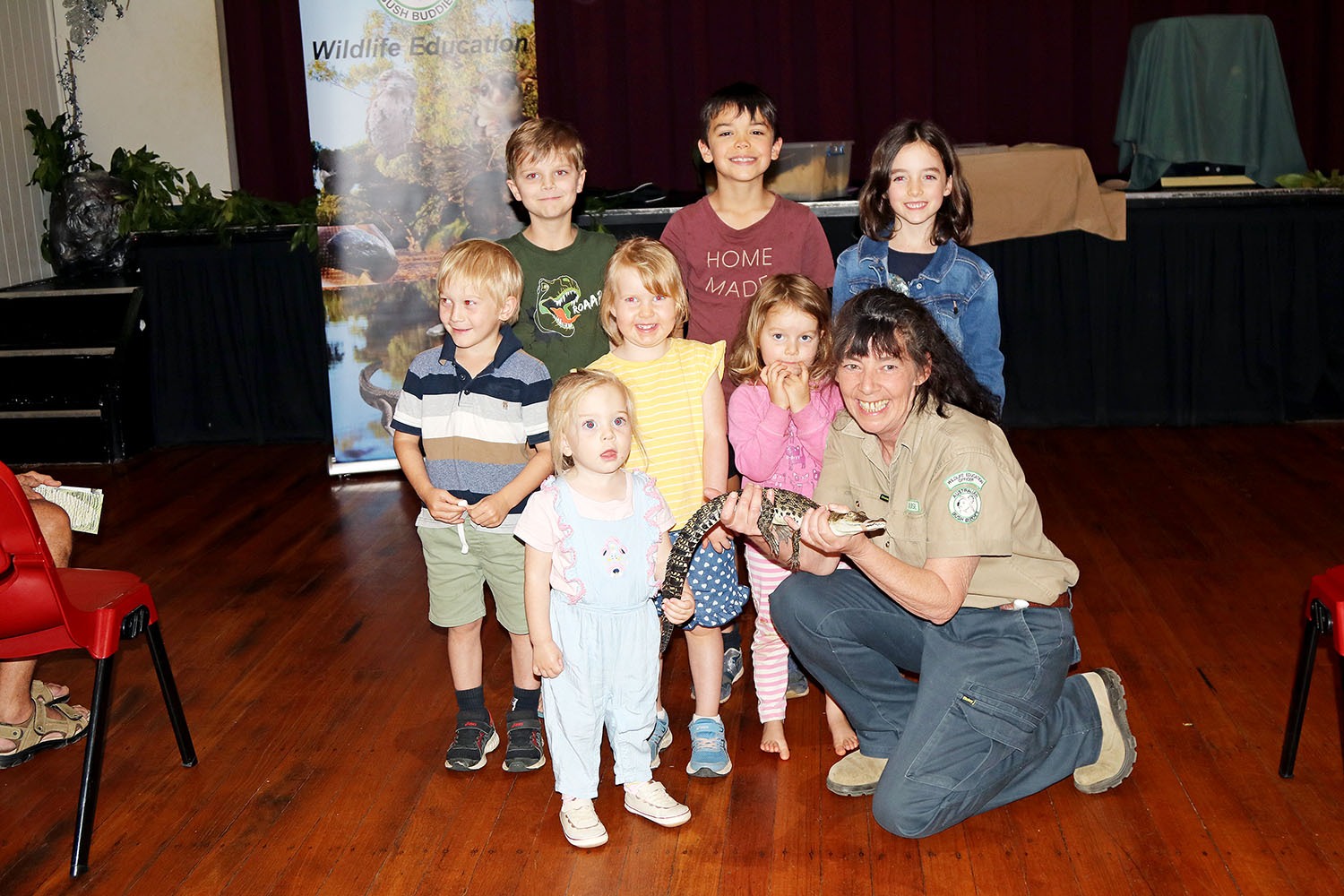 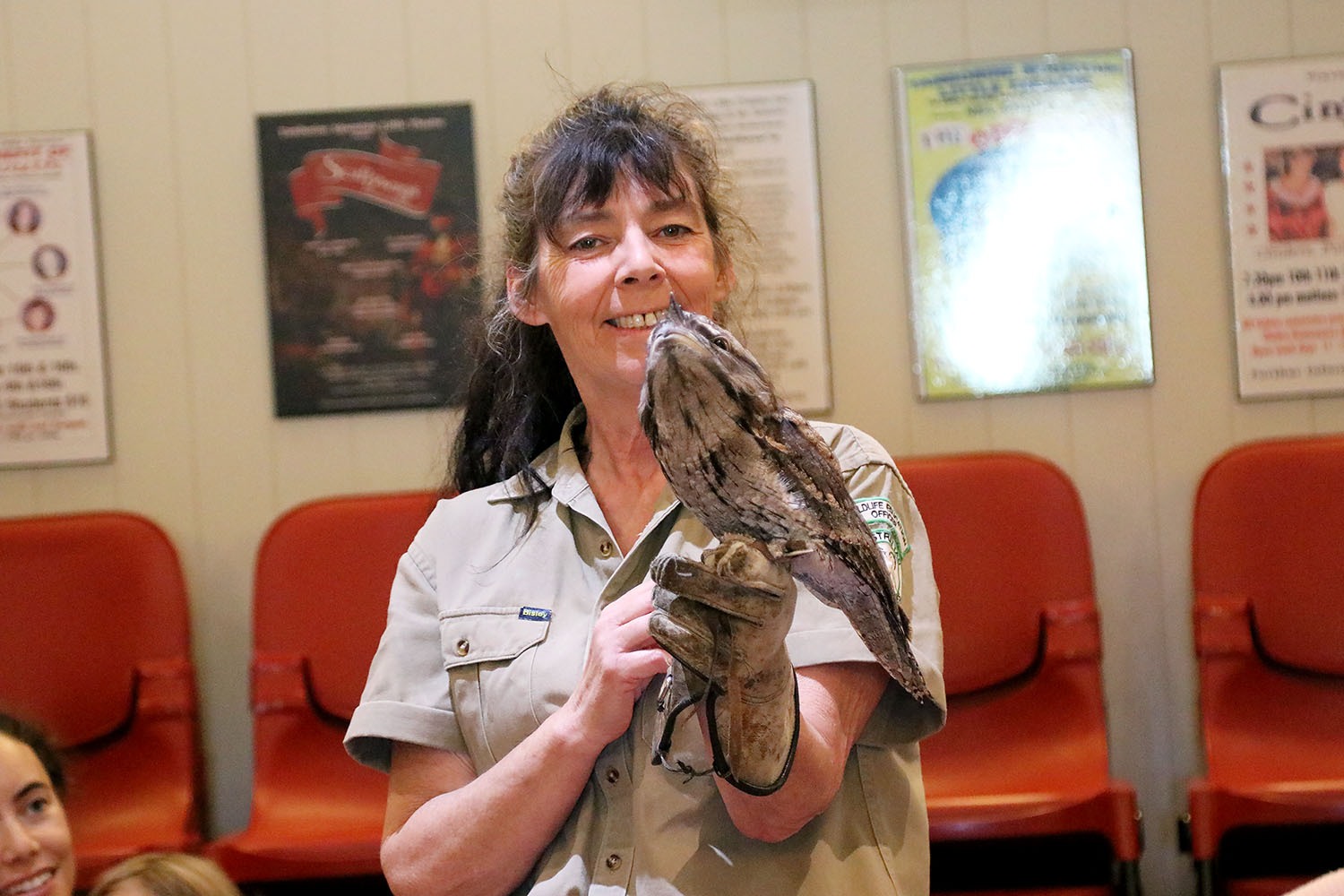 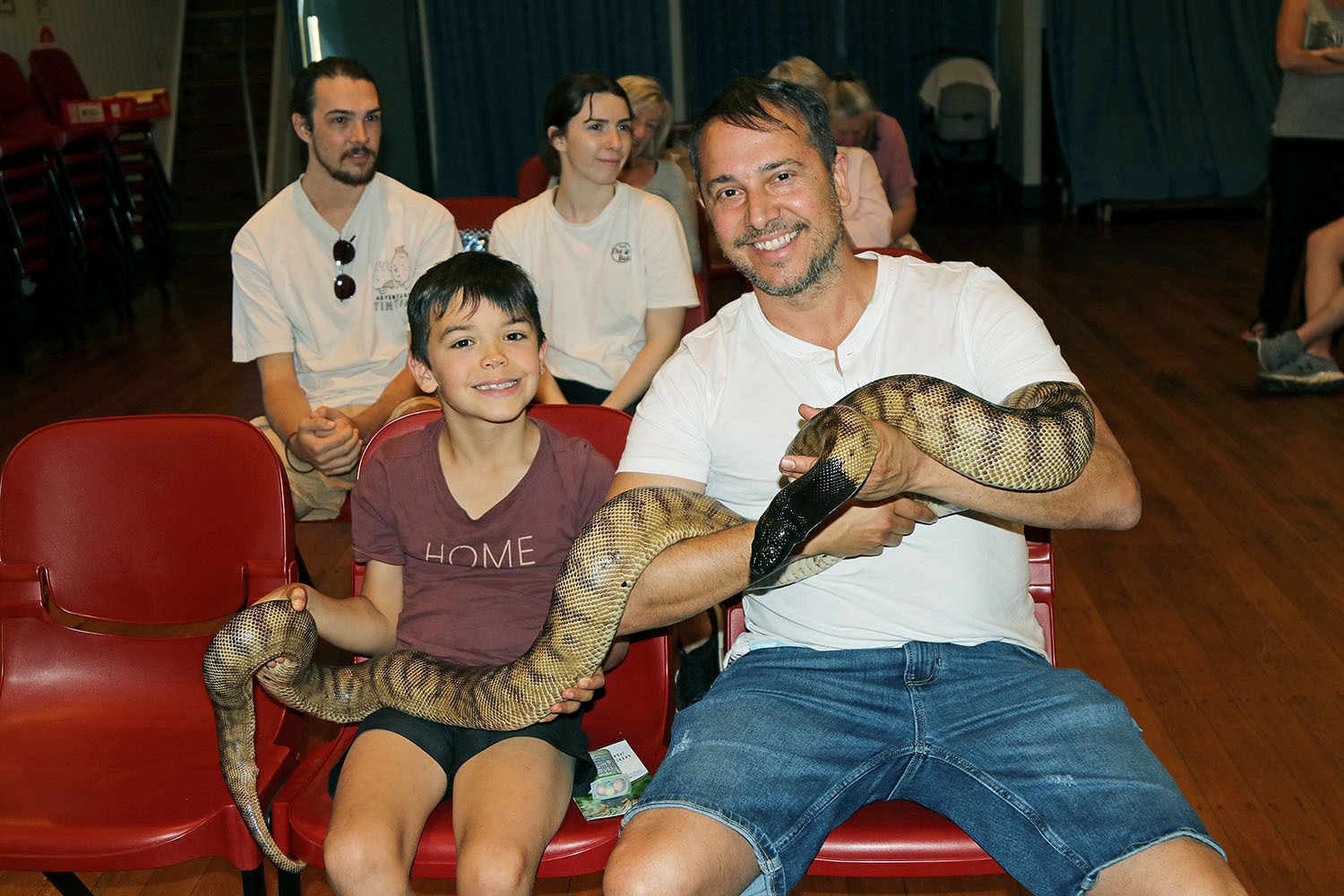 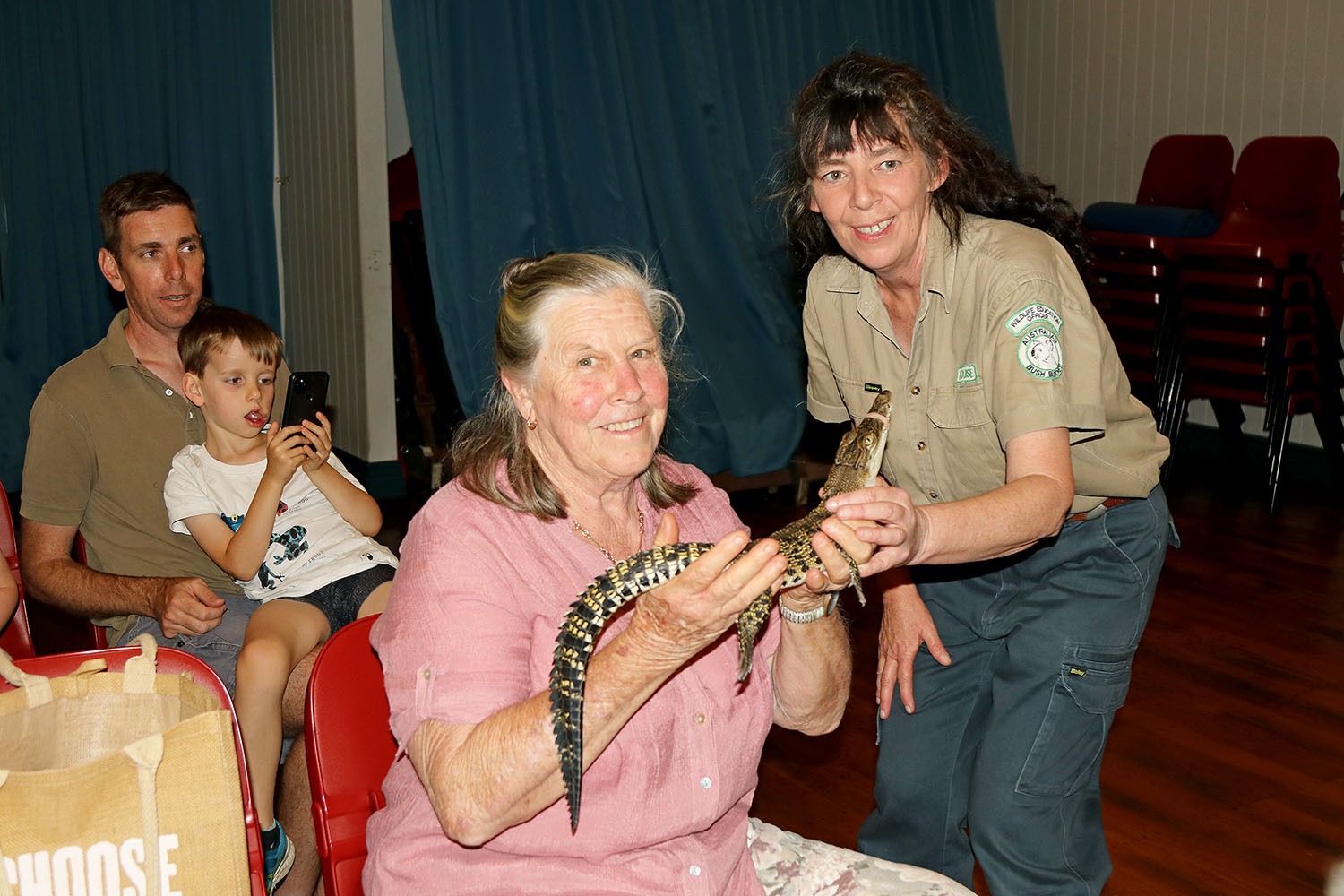 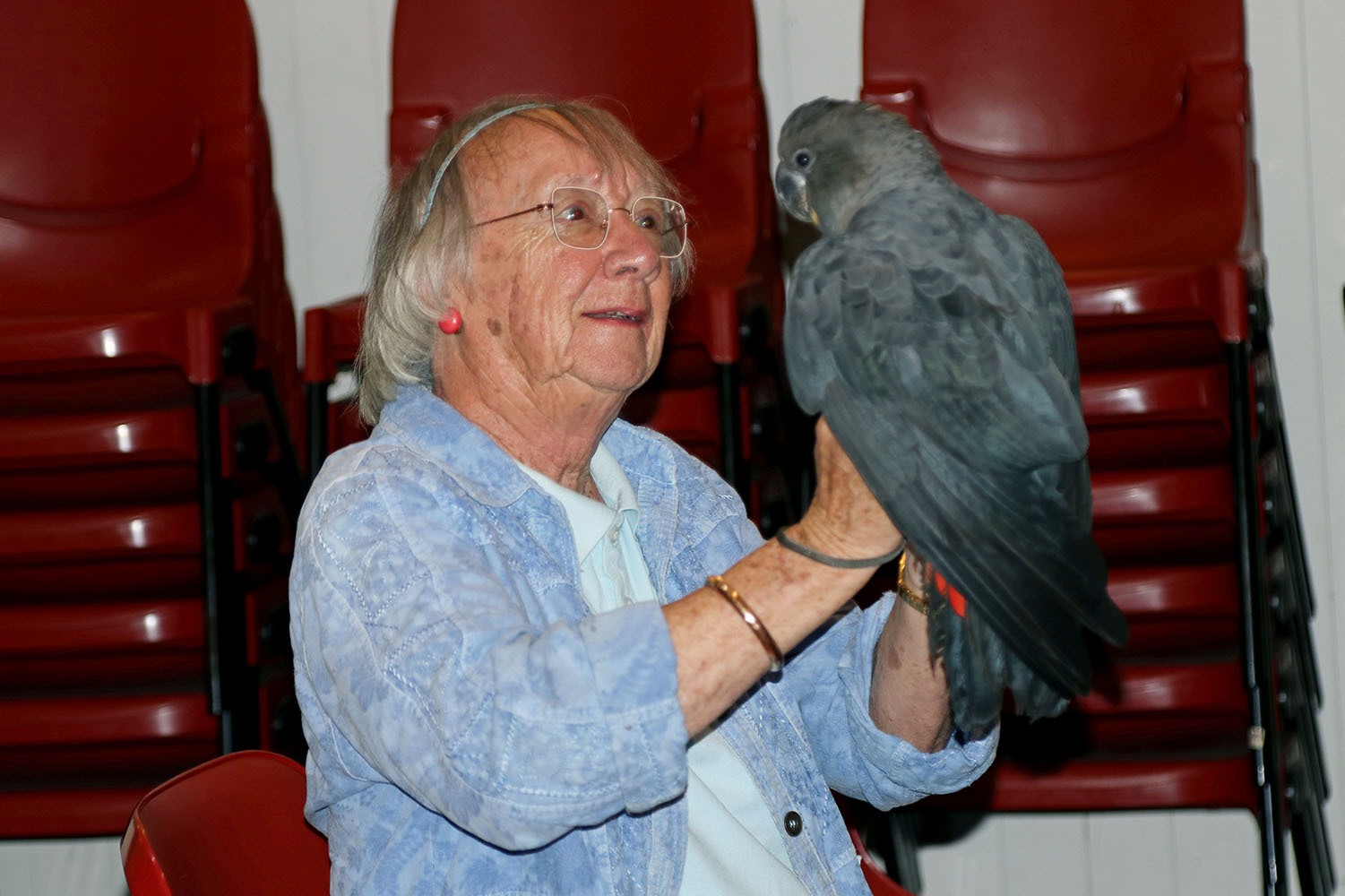 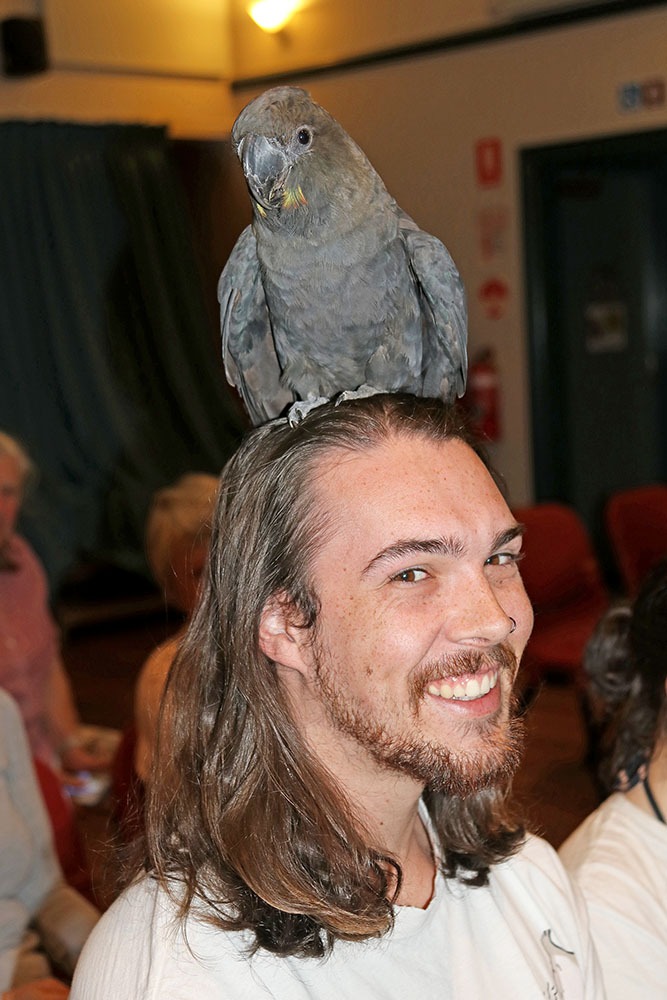 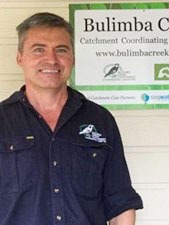 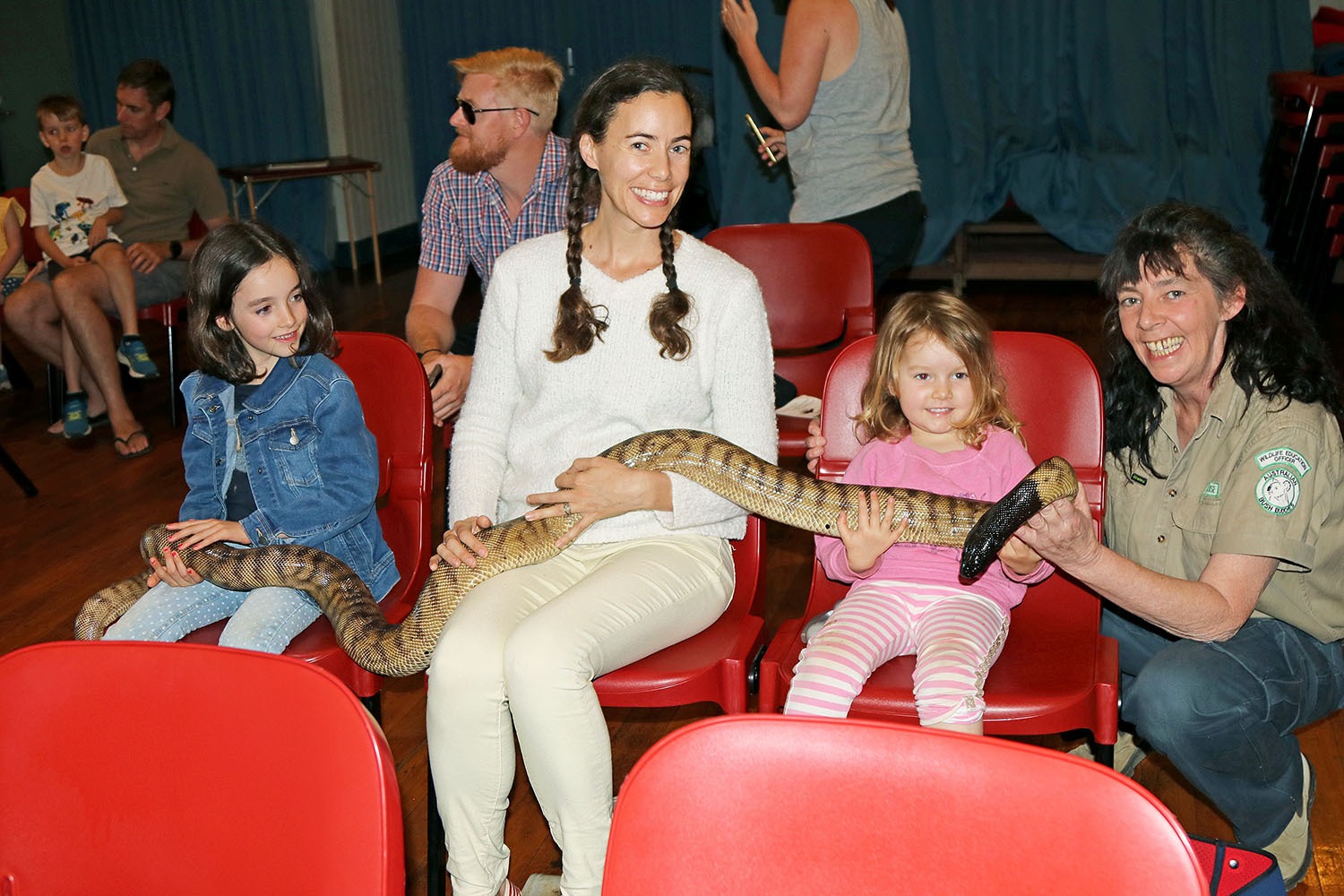 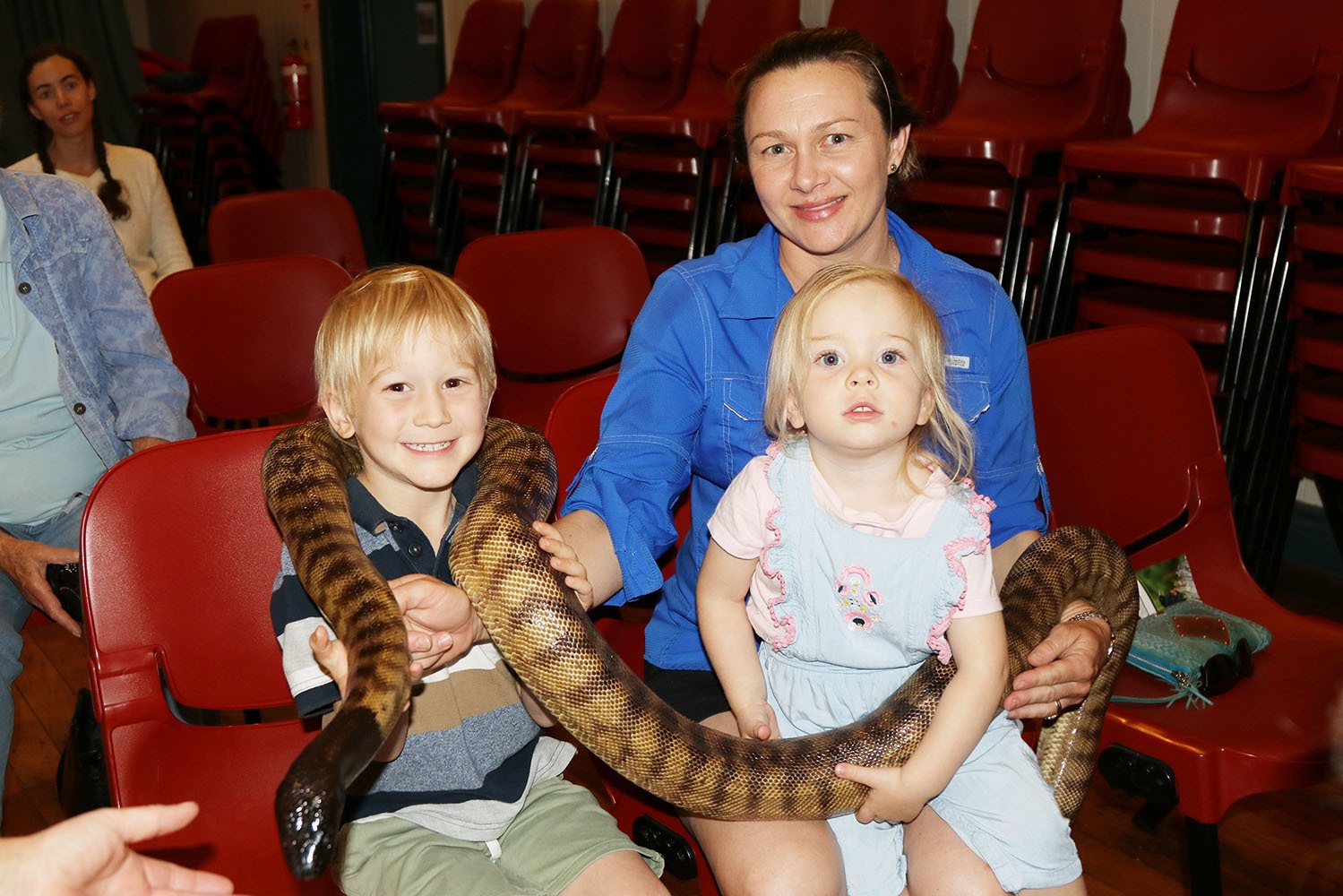 First ‘out of the box’ was ‘Taylor’ a gorgeous Tawny Frogmouth Owl. Members of the audience discovered she was very soft to pat. Louise said that they partner for life and can live up to 15 years in the wild. Although they build the ‘worst nest ever’ made of approximately eight sticks, they are also a very ‘family friendly’ bird and quite often look after the ‘neighbour’s kids’.

Next up was ‘Spook’, a very long 13 year old Black-Headed Python weighing 10 kilos of which members of the excited audience were allowed to feel his weight when Louise draped the most co-operative snake across laps and around shoulders. Louise chuckled “He gives a good massage!” Louise also said she has a larger female python of three times the girth who may attempt to eat poor Spook after mating. This is where Louise says a glass of cold water thrown on them can be quite beneficial. Although Black-Headed Pythons are tree dwellers, they will lie on rocks to warm up – head first to warm their brains. They have been known to consume a whole wallaby – after which it will take up to three weeks before they can move again!

‘Locky’ the Crocodile was liberated next from his enclosure. So named after being born last year in ‘Lockdown’, Locky will eventually grow to 6 metres and weigh 2 tonnes. At this point he will no longer fit in Louise’s car and not be safe. He will then be swapped over for a smaller one for safe use in wildlife demonstrations. Not a bad idea, as Louise informs the audience crocodiles have from 54 to 58 teeth. In between the female’s front teeth is a gap providing a space in which they are able to safely carry a hatchling. The father of course will sit in wait to eat the babies as a bit of a snack! An interesting fact is that crocodiles can drown. To prevent drowning they have a flap in their throats which closes when they dive.  When they throw a fish in the air to eat, they open the flap and swallow. Crocodiles also have three eyelids including a transparent one for seeing underwater – a fascinating creature indeed.

Last ‘out of the box’ was a beautiful Glossy Black Cockatoo called ‘Calypto’. Glossy Black Cockatoos are now classed as vulnerable due to the fact that they only eat nuts from the Sheoak Tree. Deforestation of these trees has meant their food source has become limited. Glossies need a large strong beak to crack these nuts, which caused a bit of excitement as he flew from head to head in the audience. Calypto became a bit cheeky and seemed to quite favour my head landing on it twice to attack the shiny screen on my camera! Very exciting! Calypto is very much Lousie’s baby but said he is in her will as he will most likely live to over 100 years old! So very beautiful and glossy!

The next TMPA Wild(Life) Afternoon will be held on Saturday 27 November and will feature Stefan Hattingh with his Tawny Frogmouth Owls.